Math in Board Game Design — Quick notes on Gen Con 2014

We returned home last night from Gen Con... exhausted but with huge smiles on our faces. Our experience was largely shaped by the fact that I was there primarily intent on doing research that consisted mostly of interviews with board game designers. And indeed I was able to interview 10 designers as well as make quite a number of incredible connections and continued to build some great relationships. Some of the designers we were able to meet with were names that almost any gamer would recognize and all of the interviews and other goings on were awesome.

One interesting event we attended was a seminar called "The Basics of Tabletop Game Design." A question asked by someone in the audience was regarding whether or not they should consider hiring a mathematician to help develop their game. Nearly every one of the five designers on the panel enthusiastically agreed... "screw the math! Do not worry about the math... Math should never be a primary consideration!" My impression from their comments is that, while math might... sometimes... eventually... need to be considered, it is far towards the bottom of the list for the design process.

This has caused me to reflect quite a bit on not just board game design but on other types of design and on research as well. Now, as I reflect on this it occurs to me that, if design is fundamentally the creation of a system, that this non- or  anti-math philosophy works rather well. Get the framework in place first. If we use basic systems thinking as described by Donella Meadows in her book "Thinking in Systems," we can create a system framework. We can work on that framework, refining and adjusting and designing the complete system before we may or may not need to introduce any mathematical considerations.

We can design the structure of the system and represent that structure using visual diagrams — this may require little or even no math. I often think of these diagrams as system maps or concept maps. Then when we begin to examine the behavior of the system we introduce math or perhaps in some cases not even math but rather numerical elements. The behavior of a system over time may be represented using visual graphs. So you can think of it in this way — we design the system using system maps. We can then if we choose to do so or if we need to do so reflect on the behavior of the system mathematically, possibly by using graphs as behavior is over time and graphs provided a useful tool for examining behavior over time.

Throughout my interviews and observations I have encountered many comments similar to those of the aforementioned Gen Con panel about math in the design of tabletop games. For example in one of my previous posts I quoted a designer as saying, "I was thinking about why we are here play-testing. It's not so much to work out the mechanics because you can do that very mathematically or through easily testable means. What we are actually play-testing here is ..." These comments by board game designers that down play the mathmatics has lead me to be very curious and desirous to one day interview Reiner Knizia. Knizia, a full-time board game designer (an extremely rare thing), has a PhD in mathmatics and is widely know for his smooth but extremely mathematical game mechanisms. I wonder where in his design process mathematics begins to play a role?


Last night we watched a documentary film titled "Time Zero: the last year of Polaroid film." As you might guess it's a film about the end of Polaroid film — specifically integral instant film. Like most things I enjoy, this documentary got me thinking. With my roots being in visual design and having done a lot of design for print and advertising I have a great love for the physical artifacts that we create as designers and as human beings. There is something special about the interaction that we have with the made artifacts in our physical environment. To some large and rapidly accelerating degree we are loosing these experiences as they are replaced with the digital spaces where we spend our time.

I don't completely sympathize with the points of view expressed in the film. But, the thought of leaving behind such a cherished technology is a little heartbreaking. I have spent a significant part of my life working and interacting with artists who use this technology (not to mention the fact that my daughter is a professional photographer/artist). So... much of this documentary struck some pretty deep emotions within me. Integral, instant, Polaroid film is magical even today, so many years after it's invention. This is repeatedly brought home in this film. A Poloroid is a moment capture, a work of art... literally a one of a kind instant artifact that engages all of the senses... you hear the camera's unique series of sounds as it clicks, whirs and ejects the item of interest. You can smell a faint whiff of chemicals as you hold the blank frame in your hand and the photo slowly reveals itself.

Part way into the documentary the film makers interview an employee of Polaroid. This man was involved at some high level with sales and marketing of their instant film product line. He describes the withering sales that were recorded over many years as consumers slowly embraced newer technologies. In 2005 they decided it was time to end production and phase out instant film. They put together a 5 year plan with a forcast of sales. They built up their stock of the product and pulled the plug on production to initiate their 5 year plan. What happened surprised them — sales leveled off and began to rebound. But, the company stuck the plan and so Polaroid instant film was ended.

It may come as no surprise that as I watch this film my thoughts turned towards board games. Some of you may find it intriguing that the sales of board games has increased by 10-20% every year for the last 10 years. What could explain such a trend? Why is it that I find designed physical artifacts so compelling? Is there some school of psychology to explain this? If it were explained in such a way that I understood it in some rational way would the magic die? I suspect not. In fact I believe that I would find all of it even more compelling.

Reflections On A Protospiel

Last weekend I spent 3 days at a Protospiel in Chelsea Michigan. A Protospiel is an event where tabletop game designers come to playtest their games and talk with other designers and playtesters about their work. I started attending Protospiels last summer and this was my 4th. Each Protospiel that I have attended has been fun and at each one I have felt more and more like part of the community. One of my reasons initially for attending these events was to explore the possibility of focusing my research on board game design. While it's true that my research now officially includes the study of board game design my attendance of Protospiel feels like it's as much about just being with these people and sharing in their love for the design of tabletop games as it is about any kind of research.

At this most recent event I was able to record 7 interviews with designers. I can think of few better ways to spend a weekend than, with Vicki at my side, to play board games that are under development and interview the designers of those games. That for me is close to heaven. More interviews would have been nice. But, each interview in the handful that I was able to record was unique and held interesting insights. Here is an excerpt that I think is very interesting...

"I was thinking about why we are here play-testing. It's not so much to work out the mechanics because you can do that very mathematically or through easily testable means. What we are actually play-testing here is ... what is the combination of mechanics that you are putting together? How are the players experiencing that and creating their game from that? You are giving them something to use to create an experience — I think that's what we're touching on here. What we don't know is how they are going to take those tools and how they're going to experience an experience. We think they're going to go a certain way. But, they may find that experience doesn't work for them. There are reasons right? You can't always predict the complexity of strategy's that emerge from a system until the players actually start fooling around with and playing it."


I would not say that this quote in itself was a surprise. For me it is simple confirmation that these designers, many of whom are hobbyists, have a deep understanding of design. This is the type of design understanding that can transcend the limits of one specific type of design. And while there may be many board game designers that don't share this depth of understanding, it is my belief from what I have observed that most of them do even if only in an intuitive way. I have interviewed several dozen board game designers over the course of the past 16 months and most of them have been experimenting with game design since they were in their early youth. It is not uncommon to hear the phrase "well, when I was a kid I started re-designing games that I thought could be better."

This tells me that most of these designers have carried with them a fascination with design processes and design thinking for most of their lives. They have developed a large library of experiences related to design and tabletop games. While in some cases their use of this library of knowledge and experience may be an intuitive process in others it is quite explicit. Many professional, trained designers in other disciplines lack this type and scale of focused toolset of processes and experiences.
Posted by Gary Dickson at 11:44 AM No comments: 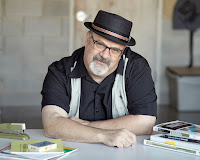